The Effect of Pathophysiologic Glucose Concentration on Biofilm Growth In Vitro

Title: The Effect of Pathophysiologic Glucose Concentration on Biofilm Growth In Vitro

Background: Diabetes mellitus has been implicated in higher post-operative complications in orthopaedic surgery patients. One of those complications is post-operative infection. Most literature has focused on the impact of increased serum glucose on the host status. There is a lack of data evaluating the effect of increased glucose concentration on the infecting microbe. There have been published models in the basic science literature that indicate adding glucose to lab media leads to an increased biofilm formation, however these published models have glucose concentrations far higher than would be seen in a living host. For this reason we investigated the effect of physiologic and pathophysiologic glucose concentrations on biofilm growth.

Hypothesis/Purpose: Does an increase in glucose concentration from a physiologic to a pathophysiologic level lead to increased biofilm formation?

Methods: This experiment studied Staphylococcus Aureus (ATCC 49230, UAMS 1) and Staphylococcus Epidermidis (ATCC 35984). A 96 well tissue culture treated plate was utilized to grow biofilm in LB media supplemented with increasing concentrations of glucose (from 0 to 320 mg/dl). After 24 or 48 hours of growth, films were heat fixed for 1 hour and stained with 0.1% aqueous crystal violet. Films were washed with DI water and dye was extracted with a 30% acetic acid solution. OD 600 nm was measured to determine relative biofilm growth. Effect of glucose was analyzed using ANOVA and Tukey’s test.

Discussion: This data represents the first experimental protocol the authors are aware of that has evaluated the effect of varied glucose concentration, within a clinically relevant range, on biofilm growth. Previous work has focused on the effect of pathologic serum glucose concentration on the host which is in no doubt a major determinant of immune function, however this data indicates that there may also be an effect on the microbe.

Conclusion: In vitro testing indicates a statistically significant increase in biofilm formation for strains of Staphylococcus Aureus and Stpahlococcus Epidermidis as glucose concentration increases into the pathologic level. 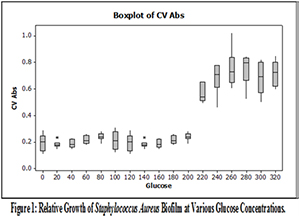