Hypothesis/Purpose: We asked whether the 68Ga-DOTA-Siglec-9 PET/CT imaging is able to (1) detect aseptic inflammation in a bone and (2) to differentiate peri-implant infections caused by S. epidermidis or S. aureus in comparison with aseptic inflammation.

Methods: Thirty adult Sprague-Dawley rats were randomized into three groups (n=10/group). A polymer catheter was placed into the medullary cavity of the left tibia followed by injections of S. epidermidis (T-54580, 3 × 108 CFU/mL) or S. aureus (52/52A/80, 3 × 105 CFU/mL) with an adjunct sodium morrhuate. In the negative control group, equal amount of sterile saline was injected via the catheter. The catheter, cut at the level of tibial tuberosity, was left in situ to serve as the implant. At two weeks, PET imaging with 68Ga-DOTA-Siglec-9 was performed with quantitative analysis of the standardized uptake value (SUV). The presence of infections and the absence of bacterial contamination in the control group were verified by microbiological analyses. Histologic inflammatory reaction was graded using a scoring system.

Discussion: The animal model was reproducible in creation of culture-positive implant-related infections. As a limitation, S. epidermidis infections were moderate/severe and not low-grade subacute infections. 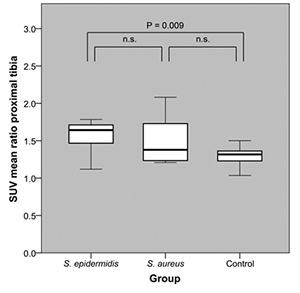