Hypothesis/Purpose: We aimed at verifying to what extent vancomycin (Van) bound to ground bone grafts is usable in the treatment of serious infections.

Methods: In vitro experiment. Ground bone grafts were mixed thoroughly for 15 min with a Van powder at a ratio of 10 g of bone graft to 0.1 g Vancomycin. Samples were tied up firmly using square-shaped sterile pieces of gauze and placed in 50 mL test tubes to which 20 mL of phosphate buffer (pH 7.4) was added. The test tubes were kept for 16 days in a thermostat (37°C). One hundred microliters of buffer was then collected from each test tube at the above-listed time intervals and the volume was restored with the same amount of fresh buffer. The levels of Van released from bone grafts into buffer were determined using high-performance liquid chromatography with UV detection at 230 nm. The levels of Van were measured under the following conditions: laboratory temperature 21°C, column Purosphere RP-18e, and the flow rate of mobile phase 0.5 mL/min.

Results: The levels of Van in defined time intervals (Table 1) can be considered steady since no statistically significant difference was found between the two values (p>0.05). The maximum mean level of Van was reached on days 2 to 4, followed by a very slow decline until the final day of measurement (day 16) where the mean level of released Van was 332.3 mg/L.

White blood cell count was elevated in 36% of patients, erythrocyte sedimentation rate (ESR) in 94%, and C-reactive protein (CRP) in 90% of patients. Elevated ESR or CRP was present in all patients.

Discussion: We observed a significant decrease in vancomycin after its maximum level had been reached, which should not occur theoretically unless some external effects come into play. One of the possible explanations is that Van may undergo thermal degradation to crystalline degradation products (CDP-1 M/m), whose quantities increase, whereas the level of its active form (factor B) decreases.

Conclusion: Our experiment performed under laboratory conditions showed that bone grafts can be used as a suitable local carrier of Van. The levels of the released antibiotic were found to be therapeutically effective and long lasting, which is valuable in terms of preventing resistance to Van and other glycopeptides within this particular group of antibiotics. 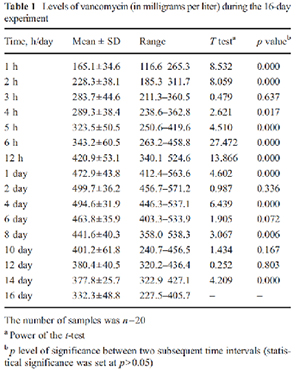