Purpose: The purpose of this study was to evaluate the efficacy of a chitosan film as a carrier for antibiotics in a drug delivery system. Chitosan films were evaluated based on drug release, mechanical integrity, and activity of eluates.

Results: Significant elution of both amikacin and vancomycin occurred after the first hour in solution.Amikacin release was determined to be 50.63 ?g/ml. The 48 hour release of amikacin was found to be 4.7 ?g/ml dropping to 0.6 ?g/ml at 72 hours (table 1). Vancomycin released from the chitosan film was found to be 83.45 ?g/ml after one hour. The release concentrations dropped significantly at hour 3 to 19.35 ?g/ml reaching a final release concentration of 6.13 ?g/ml after 72 hours (figure1, table 1). Turbidity assays performed with amikacin eluates showed that the antibiotics being released were active against S. aureus. These eluates were diluted 1:10 in the MHII broth. The eluates containing amikacin had an inhibition of 88.48% when compared to the positive control after 1 hour. After 72 hours, the inhibition rose to 98.71%. The modulus of elasticity for these chitosan films was found to be 3156.4 mega-pascals (MPa), 1950.5 MPa, and 859.9 MPa for the various solvent mixtures.

Discussion and Conclusion: Chitosan is a well?studied biocompatible material that can be used to deliver therapeutic agents in vivo. The localized delivery of antibiotics is an emerging area of study that could offer the benefit of high local concentrations of drug while avoiding the problems associated with whole? body dosing. This study characterized the in vitro release of different antibiotics eluting from a chitosan film. Both amikacin and vancomycin eluted from the films in a desirable manner and the eluates were found to be active against S. aureus. Vancomycin is the current gold?standard treatment method for methicillin?resistant S. aureus. Chitosan films are currently available in a non?loaded form used as a haemostatic device. Incorporating vancomycin such these degradable films could offer a potential aid in the treatment of musculoskeletal infections. Future studies for this approach to localized drug delivery include further characterization of release kinetics ! as well as evaluation in a contaminated goat model to test the in vivo efficacy of these films against P. aeuroginosa. The results presented in this study offer insight to the potential use of degradable chitosan films as a carrier vehicle for antibiotics in musculoskeletal applications. 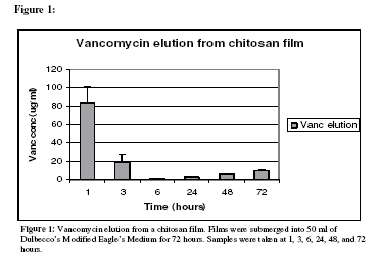