Purpose: to tested the hypothesis; Antibiotic elution and mechanical performance of pre-mixed ALPMMA is greater and more consistent than surgeon-mixed AL-PMMA, by comparing release of antibiotic and compressive load to failure during elution.

Methods: 6x12 mm cylinders were molded from AL-PMMA using five techniques to mix antibiotic into the PMMA. (1) assigned standard: Commercially pre-mixed AL-PMMA, (2) best possible surgeon mix: antibiotic powder suspended in the monomer liquid(3) worst possible mix: added to polymer powder with no-mixing, (4) usual expected : antibiotic powder hand-stirred in the powder and (5) commercial equivalent: antibiotic powder mixed in polymer powder using a commercial mixing bowl. Palacos/Palacos-G (Biomet), Cobalt HV/Cobalt-G HV (Biomet), and Simplex P/Simplex P with Tobramycin (Stryker) were studied. Antibiotic, gentimicin 1g or tobramycin 1g, was mixed in each cement using the each mixing technique (1-5). Each cylinder was eluted individually in 5cc of deionized water. Total eluant exchange was performed on days 1, 3, 5, 7, 15. Kirby Bauer bio-assay was used to measure the concentration of antibiotic in the eluant. Cumulative recovered antibiotic was calculated. The cylinder-to-cylinder variance of released antibiotic from individual cylinders in each group (2nd and 3rd quartile data) was used as an index of homogeneity. Five (5) cylinders were tested to failure in compression at each eluant exchange following ASTM standards.

Discussion and Conclusion: Measurable differences amongst the 4 mixing techniques where the antibiotic powder was mixed with polymer powder were not great enough to expect a clinically meaningful effect. Interestingly, with no attempt to mix antibiotic evenly in PMMA the antibiotic release and mechanical performance were not meaningfully different than pre-mix. The only mixing technique that produced antibiotic release that was greater than the others was suspension of antibiotic powder in the monomer. Suspension also lead to greater variance but never less than the average of other techniques. The mechanical performance was not different than the others. The decreased compressive strength seen in all mixing techniques seen over time with elution is clinically worrisome. Although it is still above 70mPa at 15 days it is close. This represents the majority of the drug release but the remaining release over time or adding greater volume of antibiotic powder could lead to unacceptable loss of strength. Further data from extended elution duration and from higher doses of antibiotic is required. Commercially premixed AL-PMMA is not superior in drug release or mechanical strength to surgeon-mixed AL-PMMA. 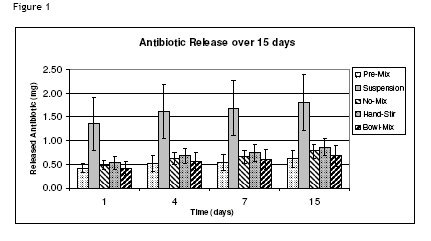 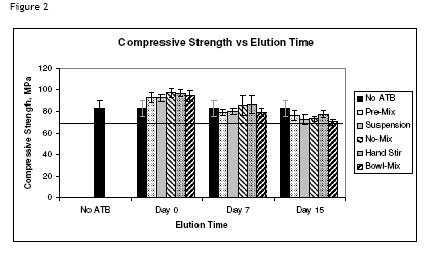