Purpose: As the numbers of prosthetic joint implantations increase, there will be an increase in the number of patients with prosthetic joint infections (PJI). The purpose of this study was to examine early unanticipated re-admissions in these patients.

Methods: Patient Population: All patients with prosthetic joint infections (PJI) discharged on parenteral intravenous antibiotics by the Bone and Joint Infectious Disease Service at the Cleveland Clinic with at least 12 weeks of follow-up. Case ascertainment: A computerized registry of all patients discharged from the hospital on intravenous antibiotic therapy between July 1st, 2007 and December 31st, 2007 with PJI. Data were collected from review of electronic health record and phone calls to patients and included patient demographics, prior and current PJI, pathogens, antimicrobial treatment, and unplanned re-admissions to the hospital for any reason. Outcomes evaluated were unanticipated re-admissions for surgery or other reasons. JMP(r) 7.0 software (SAS Institute, Cary, NC) was used for statistical analysis.The study was approved by the Cleveland Clinic IRB.

Results: A total of 90 patients were discharged on intravenous antibiotics by the Bone and Joint Infection Service during the 6 month study period, of which 80% (72 patients) had PJI. The most commonly involved prostheses were knees (40 patients, 56%) and hips (18 patients,25%). The median age was 62 years (range: 20 to 88) and 53 % were males.The mean body mass index (BMI) was 34. Thirty-one patients had diabetes mellitus (34% of total) with mean HbA1c of 7.0. Forty-nine patients had osteoarthritis, 7 had rheumatoid arthritis. Eleven patients were on immuno-suppressive medications. Only 5 PJI occurred in a primary prosthesis. The most common pathogen was Staphylococcus aureus (26 patients, 36%) and the most common antimicrobial used was vancomycin (39 patients, 54%). Thirty-four patients (47% of PJI) had unanticipated re-admissions during the 12 week follow up period [figure 1]. Of these, 16 (22% of PJI) were re-admitted and underwent unplanned surgery, 18 (25% of PJI) were re-admitted for other reasons (most commonly wound drainage, 5 patients). Site of infected joint and a prior episode of infection in any joint were not identified as risk factors for unanticipated re-admission during the follow up period.

Discussion and Conclusion: Patients with PJI discharged from our hospital on intravenous antibiotic therapy have a 47% chance of having an unanticipated re-admission, and a 22% chance of unplanned re-operation within 12 weeks of discharge. Patients, their caregivers, and their families should be alerted to this risk at the time of discharge from hospital. Additional studies are needed to determine what interventions may prevent admission in this patient population. 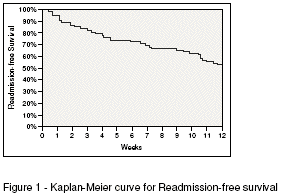