Purpose: To evaluate FDG PET scanning as a modality to differentiate surgical inflammation from early infection using a double-blind, prospective, controlled study with a proven research model for surgically producing osteomyelitis, with comparison to X-ray and with ultimate pathologic verification of results.

Methods: We present data from the first prospective, double-blind, controlled comparison of FDG PET scanning with standard X-rays for the early detection and differentiation of osteomyelitis from post-surgical inflammation. We utilized 24 adult New Zealand rabbits in an established research model to introduce a known quantity of genetically "tagged" Staphylococcus aureus in the right radial shaft of 12 rabbits, with the remaining 12 receiving a "sham" operation. We performed weekly X-rays and FDG PET scans on all animals for four weeks, using a conventional X-ray unit and a GE Advance NXI ® PET scanner. Three blinded nuclear medicine physicians read the PET images independently, recording standardized uptake values (SUV) of the surgical site and the opposite limb, as well as performing a visual determination for the presence or absence of infection. Two other blinded physicians (one radiologist, one orthopedic surgeon) scored the X-rays as to likelihood of infection. Professional biostatisticians analyzed the SUV and X-ray data for the ability to detect and differentiate infection from inflammation at weekly time intervals, correlating with the bacteriologic, pathologic and histologic data obtained at sacrifice (presence of infection, presence of osteomyelitis, ability to re-isolate the genetically "tagged" bacteria, culture and sensitivity, and microscopic appearance, as well as microCT of the surgical limb). Two animals were dropped from the study (one death on the first day after surgery, one surgical mishap).

Results: FDG PET scanning was superior for early detection of osteomyelitis and differentiation from surgical inflammation compared to X-rays. Whereas both imaging modalities could reliably differentiate infection from inflammation on day 15 and later following surgery, FDG PET imaging was clearly superior on day 8 (X-Ray ROC area 0.61 vs. PET ROC area 0.74, Figures 1 and 2). Although sensitivity was poor (27%) on the first day after surgery (day 1), visual suspicion for infection on FDG PET scanning had a specificity and positive predictive value of 100%. 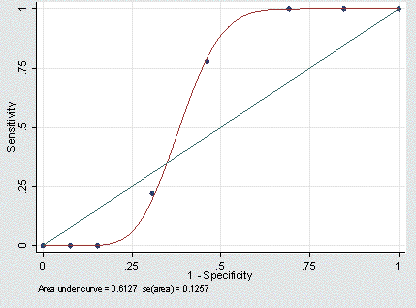 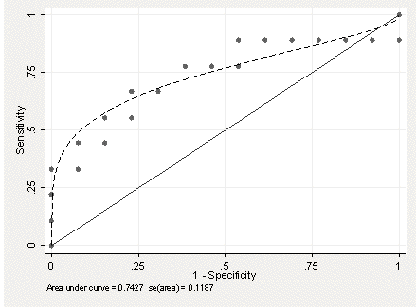 Discussion: Infectious complications following orthopedic surgery result in significant morbidity and mortality as well as expense. Detection and differentiation of infection in the surgical site from the normal inflammatory changes associated with surgery is very difficult and can delay the diagnosis and treatment of the infection, with deleterious impact on patient outcome. Our study demonstrates that FDG PET is superior to X-ray in early detection of surgical site infection and also in differentiation from non-infectious surgical site inflammation.

Significance: This is the first double-blind, prospective, controlled study to establish FDG PET scanning as superior to X-ray for early detection and differentiation of surgical site infection from inflammation. Further studies should be done to improve on the basic technique and to help establish the use of FDG PET scanning in this clinical setting.